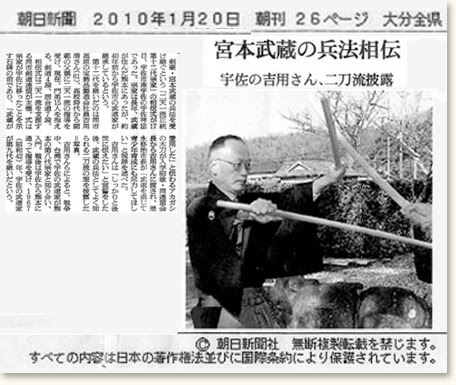 Mr. Yoshimoti, from Oita, holds the knowledge of the techniques of Nito Ryu and has succeeded as the 12th soke (successor) of the school Niten Ichi Ryu, founded by the swordsman Miyamoto Musashi.

The successor is Mr. Yoshimoti Kiyoshi (61 years old). He has received the teachings of Niten Ichi Ryu from his father since his childhood and currently has more than 15 students in his city. He is 4th dan in Kendo and 7th dan in Iaido.

The mayor of Usa, Konaga Shuji, who was at the ceremony, disclosed:
– The importance of this ceremony lies in the fact that the transmission of this tradition is important to serve as basis for the education of the youth.

On the other hand, the words of Mr. Yoshimoti were:
– I intend to solidly transmit these teachings to the following generations.